There is a little something of both Miss Havisham and Big Edie in Dorothy Stacpoole, the aged heiress to a decaying Yorkshire country house which she has ‘taken for granted’ for so long that it has fallen into decay and disrepair. Sitting atop a growling, empty coal pit and overflowing with historically important relics (including a chamber pot of Rudyard Kipling’s wee…), the house is a myriad of contradictions and metaphors, brought to life by the National’s ever-spectacular set design. Dorothy’s bolshie Archdeacon of a sister wants her to give the house to the National Trust (less out of a sense of patriotic duty and more so she can avoid the inevitable burden of tax when her big sis kicks the bucket), unawares that Dorothy has been entertaining offers from auction houses and big faceless corporations.

Alan Bennett is 78 now, and this is certainly the play of a man well into old age. By no means any less vibrant or relevant, People is very much a play concerned with old age and legacy. To call it a ‘state of England’ affair would be too strong, but there are certainly some deliberate parallels drawn between Dorothy, her house and the England they were both borne of. Perhaps the reason Dorothy claims to despise allegory so thoroughly is because in her case it is immensely fruitful. From her dilapidated armchair, where she sits in fur coat and tennis shoes, Dorothy receives old friends, porn stars, National Trust representatives and the living epitome of the entitled, moneyed power of the City. These visitors allow Bennett to comment on class, wealth and our expectations from life, tempering it all with the blunt interjections of Dorothy’s locally-coloured ‘companion’ and friend, Iris. Each character is drawn so accurately that it’s almost frightening, in fact, from the nuances of dress and manner in the country toff from the National Trust to the smug, complimenting, entitled attitude of the young man from the city. 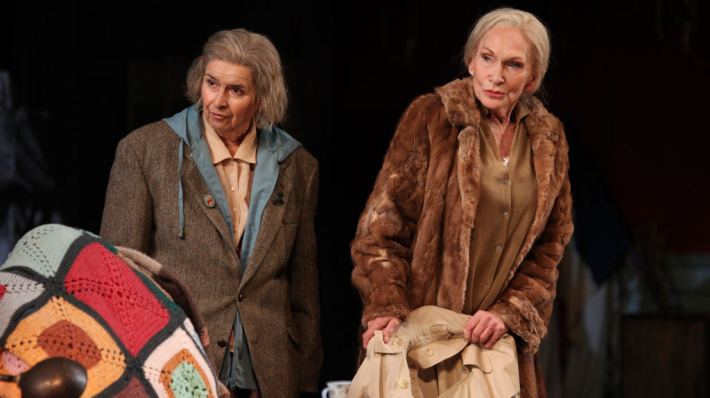 More important though, than all this commentary, is simply the fun of the whole thing. One relishes a play like this because not only the audience but the actors too are visibly enjoying themselves. From entendre to slapstick to witty social observations, there is a light touch to every moment of the play. That particular British mix of humour, pride and tradition which makes jokes about National Trust cafes seem hilarious, is perfectly tapped into by Bennett’s script. The bulk of the main parts are for old (genuinely old, card-carrying OAP old) women and it’s wonderful to see them given such lively, witty, intelligent material to work with. Unlike Miss Havisham and more like Big Edie, Dorothy, the former fashion-model turned recluse, cares more about having some fun in the present moment that clinging to the past. She doesn’t like other people in general  sense (‘Who does?’ seems to be Bennett’s attitude) but she loves and cherishes those close to her, and that seems to be what matters. At times the innuendo and slapstick seemed to drag on, and the second act isn’t quite as strong as the first, running out of steam a little, but these small niggles aren’t enough to spoil the whole. People is a thoroughly enjoyable way to spend an evening.