What interested me most about watching BBC’s The Cry far more than the show itself was the fact that so many people had told me they couldn’t bear to watch something involving something horrible happening to a child. It threw into sharp relief how comfortable we are with thrilling television such as the Bodyguard: bomb-scares after every other scene, questionable depictions of what essentially comes down to islamophobia and sexual affairs that threaten both bedroom and state – but mention a child dying, and no-one wants to know about it.

This is what made me really want to like The Cry. I wanted to find it as psychologically intense as its Sunday-night predecessor with the extra edge of emotional complexity granted by its more harrowing and personal premise. But unfortunately, the final verdict is that this ‘thriller’ rather falls flat of its potential. The Cry definitely had its own sense of grit; this much is undeniable. We empathise with Jenna Coleman’s portrayal of haggard mother Joanna as every manner of opposition appears to close in on her, from the typical harassment of the media, the scrutiny of the law, and even the intimidation and perverse intentions of her own husband. 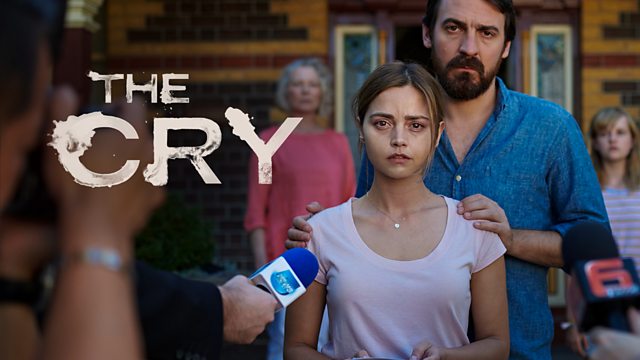 What may have been the fault of the drama then is how a show that is meant to be about a child-kidnapping becomes far more engrossed in trying to convey the mental and emotional void experienced by Joanna in the wake of losing Noah, so much so that it would be hard to deny that you lose all feeling for the lost child altogether. Because as much as you might want to empathise with Joanna, she really isn’t that compelling a character. She’s understandable, but the way the show is executed prevents her from being entirely relatable.

In fact, it would be hard to argue that you could find a care for a single character in this drama. Joanna’s husband Alistair (played by Ewan Leslie) admittedly succeeded in being a grotesque villain. He was a villain however that amounted not so much as to a spider catching you unawares from a dark corner, but more to a particularly bulbous slug slathered to the bottom of your shoe. He wasn’t a villain that you wanted to unravel or embroil yourself in further, but rather he exhausted you from the instant he appeared on the screen. The rest of the cast (many being members of Alistair’s or his ex-wife’s family) evoked a similar sense of frustration and annoyance that again was more deterring rather than engaging. Ex-wife Alex just seemed to be full of pointless rage and was completely unconvincing in the fact that she couldn’t relate to Joanna on any level.

True, Joanna was the reason that she had to split from Alistair in the first place (the other woman etc.) but both women were mothers and eventually came to despise Alistair, yet they were never depicted as being the least bit comforting or on the same page as one another. It makes the same mistake then as Doctor Foster, in the fact that we weren’t at least granted the indulgence of watching two women come together in the face of their collective emotional abuser. And let’s not get started on the irrelevance of Alistair and Alex’s daughter. Someone just really needed to sort her fringe out.

This was perhaps the main problem with The Cry – not the fringe of course but the fact that the show focused too much on the abstract idea of Joanna’s pain and isolation, from how we’re swallowed up by the billowing Australian landscapes and sobering background music to experiencing re-enactments of the voices and criticisms Joanna reads online. The show tried to be too clever, and consequently became too slow. A housemate even commented that every time she passed through the living room whilst I was watching an episode that it was very peculiar that nobody ever seemed to be talking. The focus on cinematography made a storyline that is meant to be excruciatingly intimate feel inhuman at best and tedious at worst.

The one element of cleverness that can be commended however is Joanna’s last line of the first episode, in which she and Alistair are preparing for a television interview (shout-out to the McCann’s) and he asks her: ‘do you think it will cry?’

This alone was very effective, a parody of how women are constantly told to smile. It demonstrated how, no matter the situation, women are used as prop-pieces for the benefits of their male counterparts; that women are the ones burdened with having to put on a performance for whatever society wants to see. This alone was a commendable piece of writing, and again is what almost endears you to try to relate more to Joanna’s plight. But the promise of this one line is failed as the onslaught of action (or not) that follows, the vacuous narrative ultimately causing you to care as much about what happens in this drama as Alistair did for baby Noah. Not very much at all.