Andy McVeigh, also known as Burley Banksy, has been forced to stop his mural painting around Leeds for fear of his work being vandalised by the so-called Leeds Residents Against Graffiti group.

McVeigh has been painting murals on electricity boxes around Leeds for a while now, mainly focusing on a Leeds United theme as a fervent fan of the football club. The electricity boxes became a landmark for Leeds United fans and Leeds citizens alike. Football fans would often tap the boxes for luck before a game.

McVeigh said in a recent appearance on the Light on Leeds podcast that he wanted to make a “pathway to the stadium” of the painted electricity boxes.

In recent months he has also painted various boxes outside of hospitals with slogans such as “Thank you, care workers! Unsung heroes” and “NHS you are ace” supporting the key workers at the NHS during the Covid-19 crisis. 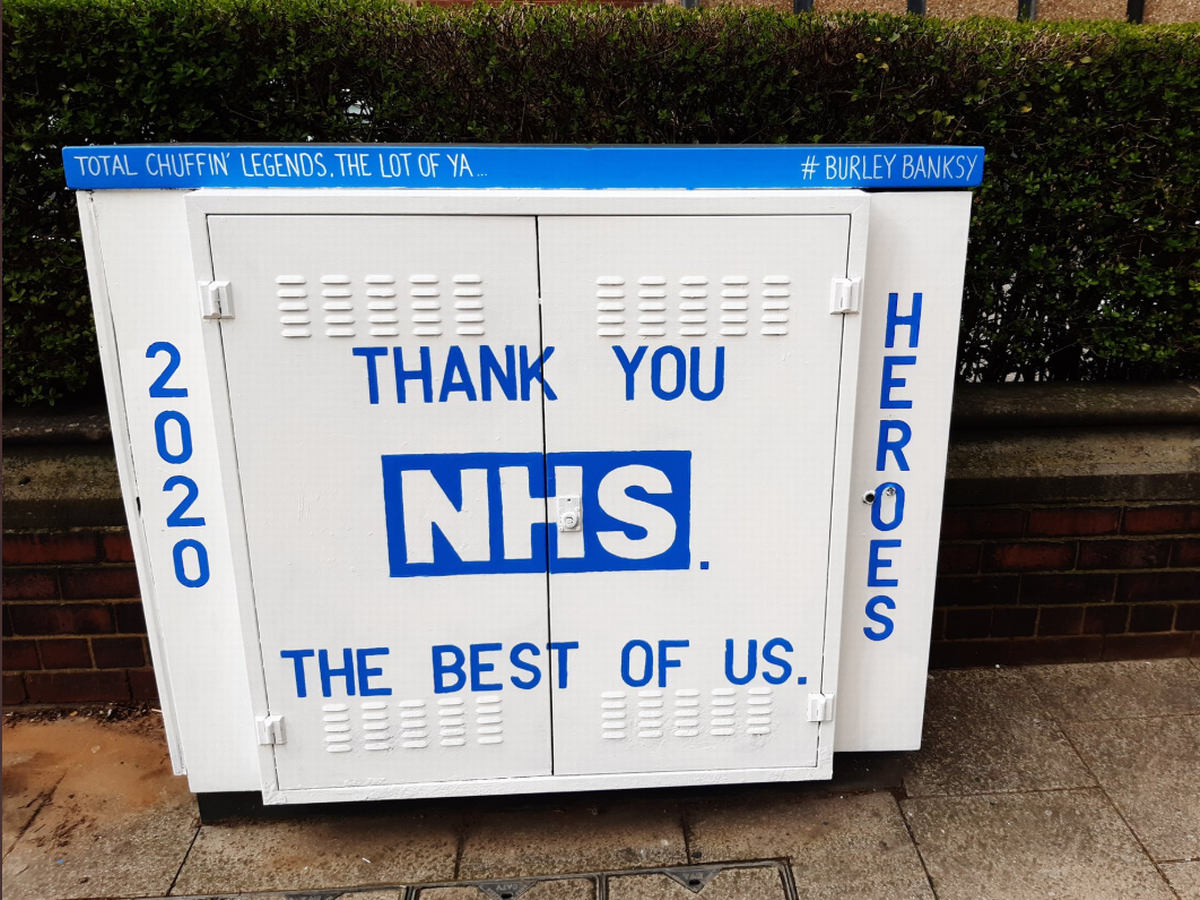 Other messages on the murals over the past few months included “Keep going Headingley” with a rainbow painted underneath and “You ok LS6?” echoing the messages from around the world to come together.

In September last year, his work was vandalised in black paint overnight by someone claiming that McVeigh’s work was the real vandalism. Leeds Residents Against Graffiti took responsibility and emailed Yorkshire Evening Post claiming that they “represent the 90% of citizens of Leeds who are not obsessed with Leeds United.”

Although this ‘group’ claimed to represent a large number of Leeds citizens who did not support the local football club or Burley Banksy, after this incident a large number of fans of McVeigh’s work rallied behind him. This included fundraising to pay for new painting supplies and days off from his primary school teaching job to redo the defaced paintings. In addition to this, Leeds United offered him and his son complimentary tickets to football games. McVeigh was also officially commissioned to decorate the electricity boxes meaning that it would become a criminal offence to deface them.

However, his work continued to be defaced, and at the beginning of August, it was targeted once more. A mural, painted in memory of singer Scott Hutchison, was graffitied over. McVeigh decided that he didn’t have “the time or emotional energy to continue”.

The graffiti over his work has made the Leeds based artist concerned over his safety. He wrote that he was getting “abusive messages written about [him] on [his] street”. He also mentioned the effect these vandals were having on his mental health, saying that when he began painting, he did it to “improve [his] mental health, but it’s gone full circle in a way.”

This is an upsetting end to what started as a hopeful project to energise the fans of Leeds United and, throughout lockdown, rally the people of Leeds to come together to support the NHS. The original threats against McVeigh’s art leave us questioning; where do we draw the line between art and graffiti?

The more widely known anonymous Banksy has been particularly influential in blurring the line between what is seen as art and what is counted as graffiti. An article in Vice from 2014 asked ‘Why Is Banksy the Only Person Allowed to Vandalize Britain’s Walls?’. The writer concluded that Banksy’s work was allowed because it brought tourism, and therefore money, to the areas it was painted in. The article went on to quote a graffiti writer speaking out against the unspoken rule that “when street artists do it, it’s vandalism. When Banksy does it, it’s an art piece.”

When Andy McVeigh was commissioned to paint electricity boxes around Leeds his work became untouchable to other vandals, but arguably any work he completed before could be counted as graffiti.

The Leeds Residents Against Graffiti, after initially targeting Andy McVeigh’s work, claimed that it was McVeigh who was doing the vandalising. However, many other people in Leeds do not agree with this opinion. This support behind McVeigh was made clear after he announced that he would cease to paint the electricity boxes. This can be seen just from the overwhelming support on Twitter, with many tweeting how much the painted electricity boxes boost them up throughout the day.

McVeigh said that his initial intention was to brighten up the streets of Leeds because most of the electricity junction boxes were covered in graffiti already. It seems that his intention was not to vandalise them but to use them as a surface to paint uplifting murals. He wanted to change them from an untidy part of Leeds into something which people could be proud of.

Art is arguably seen to bring people together, whereas the dividing graffiti is seen as ugly and reported as a crime.

It is clear that art is subjective; one person’s art could be another person’s graffiti. And so, the art vs graffiti debate continues, as does our own local Banksy’s plight to complete his artwork without fear. It seems that he has the support of the majority of people in Leeds.