In an interview with ITV on Tuesday 6th October, the Tory chancellor Rishi Sunak deftly avoided answering questions about the lack of government support for musicians, actors, directors, and freelancers in the arts by encouraging those whose livelihoods have been disrupted by the pandemic to consider this as a “fresh and new opportunity” to “adapt and adjust to the new reality”.

Following this interview, the ITV News Politics account tweeted “@RishiSunak suggests musicians and others in the arts should retrain and find other jobs”. Although this tweet was subsequently deleted, on grounds that it inaccurately paraphrased Sunak’s comments, the seeds of public indignation and uproar had already been sown.

In an article published in The Guardian, the Charlatans frontman Tim Burgess suggests that the chancellor’s comments risk ‘rebranding the arts sector as some sort of luxurious, decadent hobby’, and cynically dismissing the lifeblood and livelihood of millions of creative workers as unviable and unrealistic.

Make no mistake, the chancellor’s remarks reflect an ideological stance that is shared by many members of the Conservative Party. This is illustrated, for example, by the culture secretary Oliver Dowden telling those who work in the arts to simply “hang in there”; former MP Edwina Curry claiming “you cannot save all the puppies” in an interview with LBC; the party’s chief strategist Dominic Cummings allegedly saying that “the fucking ballerinas can get to the back of the queue” in a meeting in August. Combined with the now infamously meme-ified and tone-deaf ‘Rethink. Reskill. Reboot.’ advertising campaign, these quotes give us an insight into the prejudices that inform Tory rhetoric. 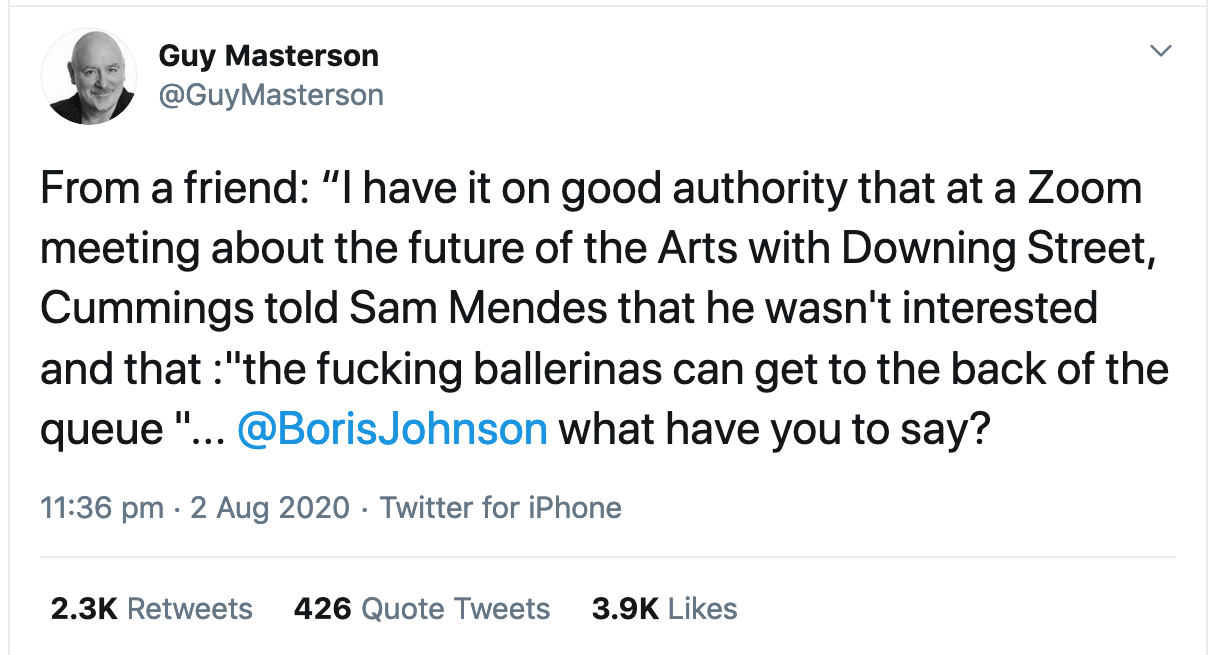 The imperative to “adapt and adjust to this new reality” obscures the agency of the government in constructing this new reality, in ultimately having the power to decide who drowns and who is thrown a life-ring. One such life-ring takes the form of the much-publicised Culture Recovery Fund (CRF) of £1.57bn, which is designed to see businesses through until April 2021. Yet according to the government’s own statistics, the Creative Industries contributed more than £111bn to the UK economy in 2018 and was growing five times faster than the national economy before the pandemic, which puts the scale of the ‘recovery fund’ into perspective.

Furthermore, as commentators for The Telegraph and Arts Professional have pointed out, only two-thirds of the applications to Arts Council England (ACE) were successful, and the geographical dispersion of these awards was heavily skewed, with more than a third of grants going to venues with London postcodes (£87 million). Successful applicants were also instructed to publicly credit the CRF as a condition of receiving their grants, in a bizarrely coerced performance of gratitude. In accepting the money, they essentially had to agree to participate in a #HereForCulture PR campaign.

Precarious freelance and self-employed workers form a bedrock of the workforce. While the CRF provides some support for some bricks-and-mortar institutions and venues for a limited amount of time, it fails to account for freelance and self-employed creative labourers who live from gig-to-gig, paycheck-to-paycheck, often working multiple jobs. ExcludedUK, an alliance which represents over three million excluded from the Self-Employed Income Support Scheme, estimates that one in 10 workers have not received any meaningful help from the government. Last month, the booking site Encore published a study which claims that 64% of musicians polled were considering giving up music because of the financial impact of Coronavirus. This is echoed by the Covid-19 Impact Poll conducted by the Musicians’ Union, which found that 87% of musicians are facing financial hardship as a result of the government’s income support schemes ending in October.

The dynamics of Rishi Sunak’s “new reality” are thus becoming clear: the viability of creative careers and aspirations are at risk of becoming increasingly stratified along established lines of wealth and class, ring-fencing the arts for a privileged elite. The decision to leave millions of workers to drown or to “adapt and adjust” is an act of political violence. It is underpinned by prejudices of what constitutes useful work, who is worth saving, and who is not.

Ultimately, for most of us, the lockdown has been made bearable by an ecosystem of creative labour, which now faces a serious existential threat. Yet, to quote the composer Jim Sutherland:

“There is a real disconnect between what people consume and the people who create it. There is no art without artists. That’s the bottom line. It’s all very well putting money into the infrastructure and that is important but without all these freelancers where will the art be – what will these empty buildings do? It’s not enough.”