How to discipline children and the extent to which punishment should be used is an age-old question for parents and society that leads to much controversy. The reactions following Scotland’s ban on smacking are a strong reminder of this.

Following a vote on a member’s bill introduced by Green Party MSP John Finnie which saw 84 votes to 29, Scotland has become the first country in the UK to ban the smacking of children and to outlaw corporal punishment, effective from the November 7th under The Children Act 2020. This means that for parents in Scotland, the defence of ‘reasonable chastisement’ can no longer be invoked when justifying smacking their children. This also makes Scotland the 58th country in the world to do so; Sweden was the first in 1979, and Wales is likely to be next with a similar bill expected to be introduced in 2022.

For many groups, including charities, activist groups and MPs, this is huge progress in children’s rights and sets a precedent for the rest of the UK and Europe. NSPCC Scotland Policy and Public Affairs Officer Joanna Barrett, for example, said that this ban “gives children in Scotland their rightful protection against assault,” and this new legislation aligns Scotland with the views of the United Nations, in which Article 19 of the Convention on the Rights of the Child, which the UK has signed, potently states that children and young people should be protected from all forms of violence, abuse, neglect and mistreatment “while in the care of parent(s), legal guardian(s) or any other person who has the care of the child.”

There are many reasons on the side of the argument that states that smacking children should be banned. Alongside human rights also applying to children, other arguments include the fact that physical punishment wrongfully teaches children that it is acceptable to hurt someone when they have done something wrong. Similarly, when a child’s emotions are strong; some claim smacking makes behaviour worse and can lead the child to begin lying to avoid punishment; potentially damaging relationships within the family.

Despite large support, there are many who are critical of this policy change. For instance, following early debates in Scotland’s Parliament regarding this bill, a campaign group called ‘Be Reasonable Scotland’ emerged arguing that, amongst other reasons, the bill should not be passed as it would criminalise good parents who know how to suitably punish their own children, of whom they are raising – not the government. 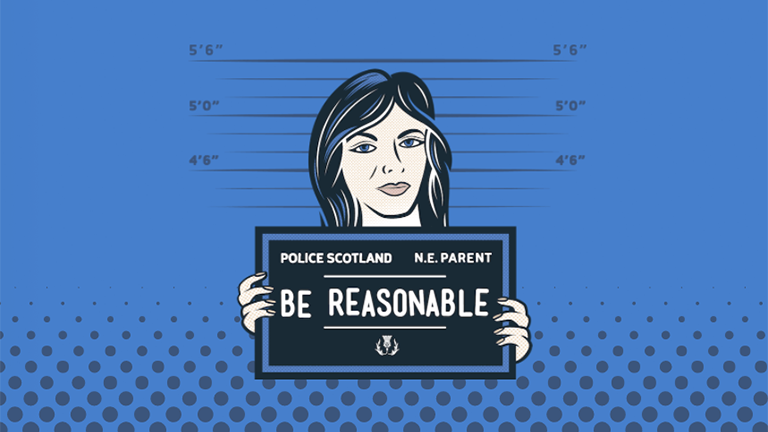 Image from ‘Be Reasonable Scotland’, a group set up to counter the ban on smacking.

The debate, which emerges frequently when discussing laws within the family, revolves around the public-private divide. For supporters of the ban, this is a step in the right direction for children and families. For critics, it is a fearful reminder of the creeping powers of the ‘nanny state’, and the eroding powers of the individual in a liberal democracy. Throughout history, liberals (including infamous thinkers John Stuart Mills and John Rawls) have argued that people are rational beings and, because of this, they should be free to act as they please within the private, domestic sphere. To this day, claims following this political philosophy have been invoked to defend what it thought to be the wrongful policing of the family, as can be seen from ‘Be Reasonable Scotland’, who argue that parents know what is best for themselves and their children. Additionally, the claim from Free Church of Scotland that banning smacking goes against God’s authority suggests that the state is now involving itself in the private practices of religion, infringing on an individual’s rights to practice religion.

‘The overarching question is related to where the line is between rightful protection and illegitimate interference.‘

It should be noted that many liberal thinkers, including Mill and the creation of the ‘Harm Principle’, argue that the state should get involved within the private sphere when harm is being done to others. So this debate seems to fall under yet another argument regarding whether smacking a child is harmful. For instance, on Be Reasonable Scotland’s website, it states that “the current law already protects children from abuse”, referring to the legislation that was already in place before the ban on smacking which states that punishment beyond “reasonable chastisement” is illegal – often understood as it being ‘illegal if it leaves a mark’. From this language, contra the NSPCC and United Nations, there seems to be an assumption by the group that smacking is not included in the definition of abuse. Yet, in 2017, the NHS published to their website a report entitled, “Smacking children linked to psychological problems in adulthood,” with research stating that those that had been smacked as children were linked to depression, higher levels of alcohol intake, and drug use in adulthood. This does not mean that the research found a causation between smacking and psychological problems, which may lead critics to reject this. However, in changing the law, the Scottish government seem to have assumed that smacking is harmful.

The overarching question is related to where the line is between rightful protection and illegitimate interference. And this question has no definitive answer, with academic Susan B. Boyd summarising this lack of objectivity by stating that, “the dividing line between the two spheres is wiggly, slippery, and impossible to draw.” On the one hand, policies such as banning corporal punishment are upholding children’s rights. On the other, the state is deciding what is, and isn’t, allowed within the ‘privacy’ of the family.
.