Donald Trump’s presidency defied many significant political norms, making it reasonable to expect that his post-presidency will be the same. After his term ends on 20th January 2021, Trump is going to have a lot of free time on his hands – yet it’s difficult to believe that he would quickly fade from the limelight.

Typically, former presidents take a step back from day-to-day politics: George W. Bush has taken up painting since his presidency, Jimmy Carter lives on a relatively modest ranch and Barack Obama was pictured kitesurfing with Richard Branson less than a month after his term ended in early 2017. Given Trump’s penchant for golf, it’s fathomable that he would want to spend more time in that pursuit.

Additionally, members of this elite group usually capitalise on their time in office with multi-million dollar book deals. Barack Obama’s recently published presidential memoir A Promised Land was reportedly part of a record-breaking $65 million deal that also included his wife Michelle’s autobiography Becoming. A follow-up to Trump’s infamous ghost-written memoir The Art of the Deal is a near-surety. Even if he struggles to attract a publisher due to controversial content, he could easily self-publish in the same way his son Donald Jr. did with his latest book Liberal Privilege.

It’s not unheard of for ex-presidents to make a brief return to politics in some form – they are at liberty to endorse or campaign on behalf of their party’s nominee (as Obama did for both Hillary Clinton and Joe Biden); or take up diplomacy or humanitarian causes, like Jimmy Carter acting as a peace envoy with North Korea during the Clinton presidency. On the whole, however, they scarcely return to the political fore once their term ends.

It is considered to be a convention that former presidents do not criticise their successor, although this has been contradicted on multiple occasions, including by all living former presidents. It’s hard to imagine that Trump would be able to resist taking shots at Biden via Twitter once he leaves the White House. 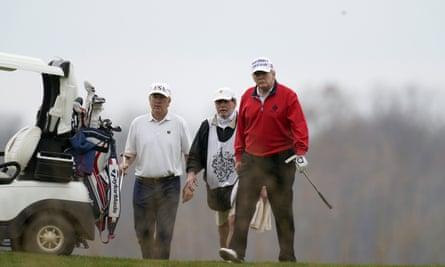 Pictured: Donald Trump playing golf, something he’ll have a lot more time for come January – though to be fair, he still managed to find quite a lot of time for it during his presidency.

It may well be the case that Trump would struggle to live a quiet post-presidency even if he wanted to, considering that he may face a fair amount of litigation once his term ends, pursuits he has regularly decried as hoaxes and witch hunts – although something he was effectively immune from whilst in office.

The Manhattan District Attorney Cyrus Vance is currently investigating the role that the Trump Organisation may have played in alleged unlawful ‘hush-money’ payments made to two women, including Stormy Daniels, during the 2016 presidential campaign to prevent the disclosure of unfavourable information about the then-candidate. Since the beginning of this inquiry, it has expanded into a wider investigation surrounding possible insurance and bank fraud, including a (hotly contested and as of yet unfruitful) subpoena of Trump’s tax returns.

Trump is also embroiled in multiple defamation lawsuits after he called women who accused him of sexual assault liars, in cases brought by journalist E. Jean Carroll and former American The Apprentice candidate Summer Zervos. Furthermore, he has been threatened with legal action from within his own family: Mary Trump, his niece, accused him of committing fraud by manipulating her inheritance after his father Fred Trump’s death.

The President may also be on the receiving end of litigation stemming from his 2019 impeachment trial after he allegedly abused military aid against Ukraine in exchange for potentially damaging information about Hunter Biden, the son of his eventual campaign opponent.

It’s nothing new for an outgoing president to face the prospect of legal trouble. Richard Nixon famously resigned as president in 1974 after the infamous Watergate controversy to evade the prospect of impeachment. Ultimately, Nixon avoided any legal penalties for his part in the scandal after his successor, Gerald Ford, pardoned him – raising the prospect for a legal pardon extending Trump’s enjoyment of legal immunity.

Last week, the President controversially used his power of pardon for Michael Flynn, a Trump aide convicted of lying to the FBI about alleged contacts within the Russian government, as part of a larger enquiry into suspected foreign interference in the 2016 election. In 2018, Trump suggested he had an “absolute right” to pardon himself to pre-empt any potential legal threat he may face after leaving office. However, legal experts dispute whether or not presidents are constitutionally permitted to pardon themselves.

Aside from the threat of litigation, Trump may also face financial pressures. Despite being entitled to an annual pension of over $200,000 under the Former Presidents Act of 1958, Forbes reports that he owes over $1 billion, less than he owns in assets, though many of his creditors are unclear. However, The Trump Organisation is thought to have taken a considerable financial hit this year since most of its ventures and properties operate within the leisure industry, one of the sectors worst affected by the coronavirus pandemic.

Regardless, it’s been speculated that Trump may not yet wish to hang up his red cap and instead run for a second term in a future election. His winning of over 70 million votes in the recent poll, a record for a losing candidate, proves that he still enjoys strong support in certain sections of America.

His family have also frequently been the subject of media speculation about future presidential bids, in particular, his son Donald Jr. and more recently his daughter-in-law Lara Trump. Regardless, the election results suggest that Trumpism still strikes a significant chord in American society, and it’s likely that future Republican candidates will try to capitalise on this regardless of whether or not they are family members.

Besides returning to his business empire, Trump may choose to enter the media industry. After the election, the love affair between him and Fox News ended spectacularly after the latter called the election in the favour of the former’s opposition; causing the President to publicly support more niche conservative sources such as Newsmax and One American News Network. Christopher Ruddy, the CEO of Newsmax, is close to the President and it is thought that Trump could appear on the network more frequently once his term ends. It is not unprecedented for ex-presidents to strike deals with media companies – the Obamas signed a deal to produce documentaries for Netflix in 2018.

Therefore, whilst the end of the Trump administration is well in sight, it is a near-inevitability that he’ll be prominent in the global eye for years to come, whether that be in the form of a criminal conviction or a political comeback.