Marching for Change with Reclaim the Night Leeds

Last Saturday, the 27th of November, I joined Reclaim the Night in their protest against gender-based violence. The protest took us from Hyde Park, through the city to Leeds City Hall, where we heard speeches from songwriter and mental health campaigner Miranda Arieh, LUU’s own Equality and Liberation Officer Natasha Fowler-Ekar, and Kiki Luu from the LUU spoken word society. Despite the sub zero temperatures, a turnout of around 250 protestors, equipped with placards, megaphones and a passion for change, made for an eye-catching scene.

Before the march starts, we form a huddle around the Queen Victoria statue in Hyde Park and are briefed on safety procedures for the night. As we begin to walk, escorted by the Police and Community Support Officers, onlookers peer curiously at the protest. One asks me what the aim of the march is. I point them to Reclaim the Night’s recent social media posts, which explain that this is the 44th march of its kind since 1977. I begin to chat to others that are marching, as we question the change that we have seen and are still yet to see in the four decades since this movement first began.

I speak to Amber, one of the organisers of the protests, who speaks candidly to me about what change she is marching for. I ask her about potential prevention strategies for future crimes against women and other marginalised genders. She tells me that she thinks teaching consent to young children is a good idea, and speaks of the need for better street lighting in our area. We discuss other strategies that could be implemented by the Council for people who fear their safety on the streets. Amber believes that it is those in positions of high power that need to be “supporting victims” and  “helping people understand the consequence of their actions”.

On the subject of how social media can help survivors of abuse come forward she says that having more people talking about these issues this will help to “instill the notion that (survivors) are not alone” and “make it easier to talk”. 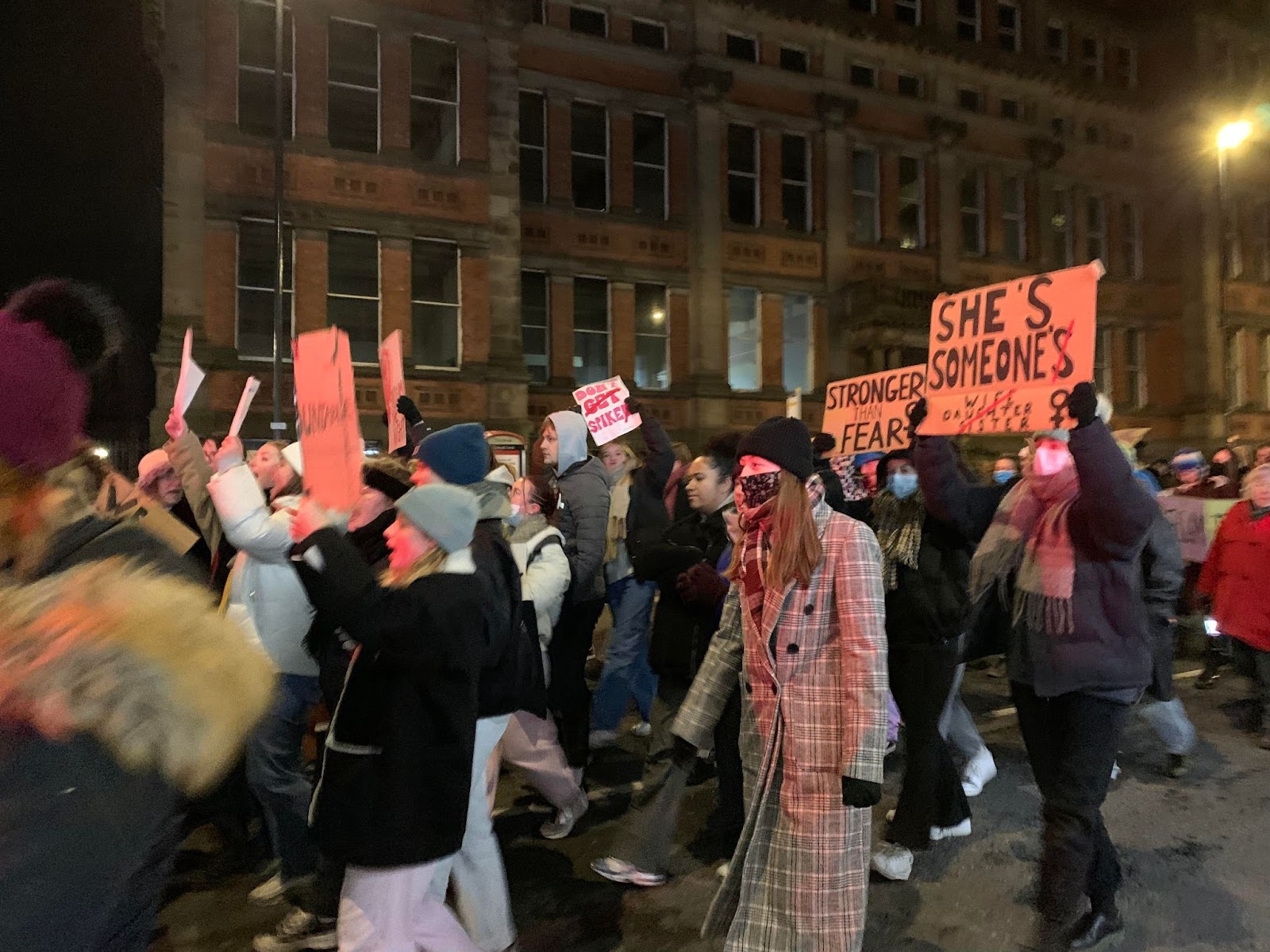 As we are led across East Parade Street, a member of the public starts to applaud. I manage to photograph this, capturing a resolute and proud stance, the group responding to this in what would come to be one of many moving moments of the night. A palpable feeling of anger towards systems and attitudes that facilitate and later undermine gender based violence could be felt throughout the protest. This commonality binded a group of strangers, standing together to raise their voice.

We reach Leeds City Hall at around 22:10PM. Cups of water are handed out as we settled to hear a speech from Miranda Arieh, an award winning mental health coach, public speaker and activist local to the area.

Miranda’s speech is powerful. There are “no blurred lines” when faced with the truth she says. She discusses how the focus when it comes to gender-based violence has historically been more on “intervention than prevention”, expressing that society “teaches women and girls how to deal with the after effects of being victims” rather than directing efforts “to prevent boys from being perpetrators”.

“When we create a culture of silence, we give violence the power”. Miranda finishes her speech with ample applause from the crowd. 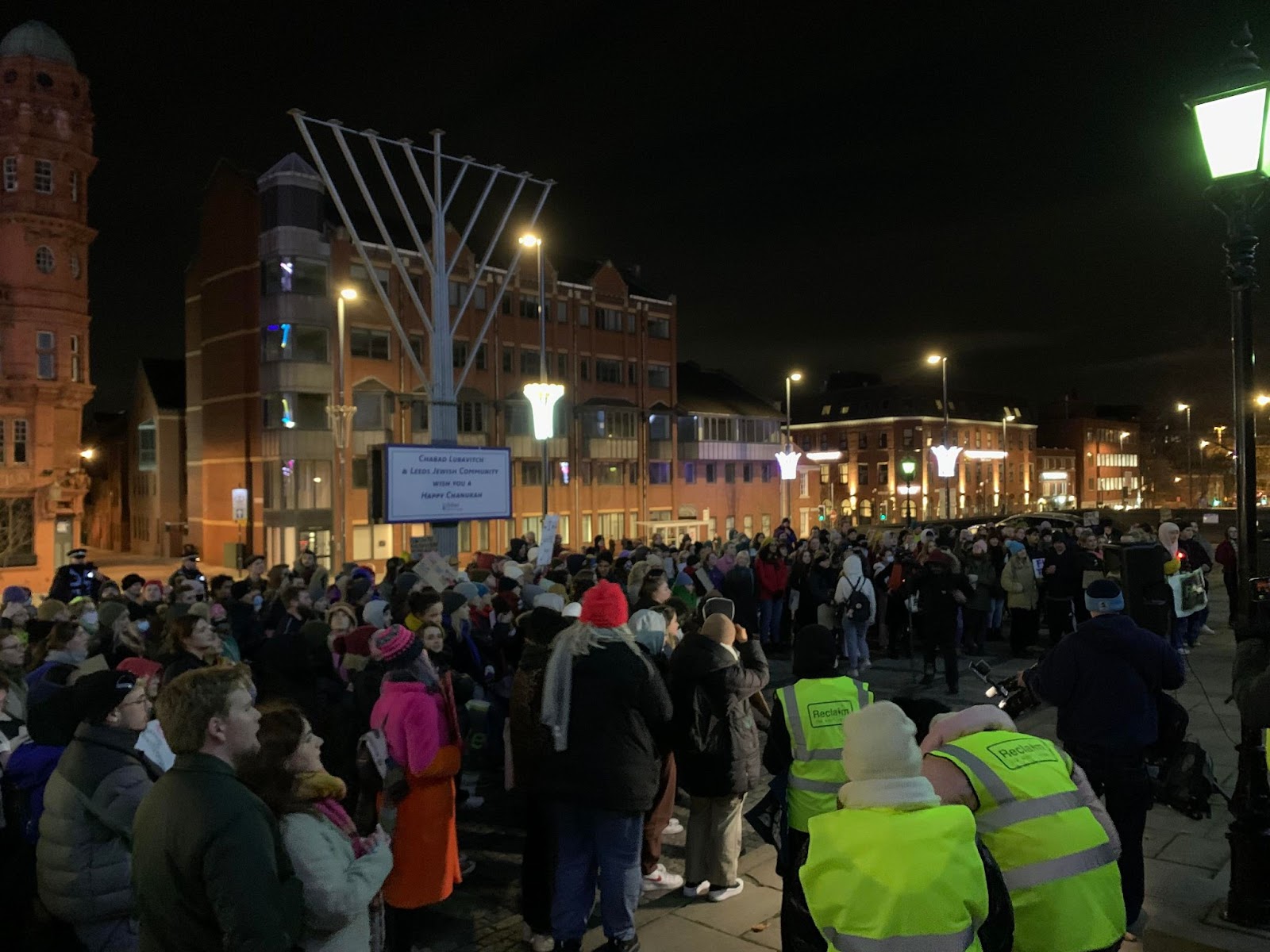 Another strong speech follows from Natasha Fowler-Ekar, our Equality and Liberation Officer here at LUU, who says that “as a black woman, I wouldn’t care about being murdered, I would be scared that nobody would care”. She also speaks of the struggles faced by other marginalised genders, stating that “people of the trans community are dying daily and there’s no voices. For all marginalised genders who have not been heard, I hear you.”

She stresses the importance of “looking out for strangers and being a friendly face in a sea of fear”. She finishes her speech by insisting that “the biggest form of protest is enjoying ourselves and having our lives” with the hope of being able to do so “without fear”.

After the protest has finished, Reclaim the Night post to their social media pages that the night had been “moving, powerful and emotional”. Thanking those who marched with them, they add that they “look forward to an even bigger march next year”. Hopefully in another 12 months time, we will be marching for more positive changes to celebrate.