Many of the supply problems facing the UK economy today relate to Britain’s current shortage of lorry drivers. According to Logistics UK, 96% of logistics businesses are having problems recruiting, and as a result companies are beginning to run short of warehouse staff, van drivers, and transport managers. The Trade Association has cited that upwards of 19,000 HGV drivers have left the UK following the pandemic and Brexit, and approximately 45,000 new drivers have not been able to begin work due to COVID restrictions.

In recent weeks, this shortage of HGV drivers has triggered a fuel crisis that has left parts of the UK with a significantly lower fuel supply than is necessary to meet demand. The reported shortage of lorry drivers sparked fear among motorists and has led to mass panic buying of fuel. Some petrol stations have been forced to temporarily close, with major fuel companies such as BP and Esso warning of petrol and diesel shortages at some of their stations. Others have rationed the amount of fuel customers can buy in an attempt to reduce long queues outside many petrol stations.

What caused the shortage?

Many countries across Europe have recently experienced driver shortages, but in the UK Brexit has compounded the problem. Following the UK’s exit from the EU, many European drivers returned to their home countries because working in the UK involved additional border bureaucracy which negatively impacted their income. British politicians have been reluctant to blame Brexit for the crisis, although Labour’s shadow chancellor Rachel Reeves stated it was “obviously a contributory factor” to the shortage of HGV drivers.

The pandemic saw even more drivers return to their home countries, as travel became increasingly restricted last year, and large parts of the economy shut down. Many UK haulage companies have said few have returned to work.

To make matters worse, there is a huge backlog in HGV driver tests due to current Covid restrictions. The industry warned the prime minister in June that there were 25,000 fewer candidates passing their test in 2020 than in 2019.

Recent analysis of fuel data has also revealed that panic buying exacerbated the shortage. In the run-up to the peak of the crisis last week, national supply of fuel did fall, although not drastically when compared to imbalances of sales and deliveries in previous days and months. 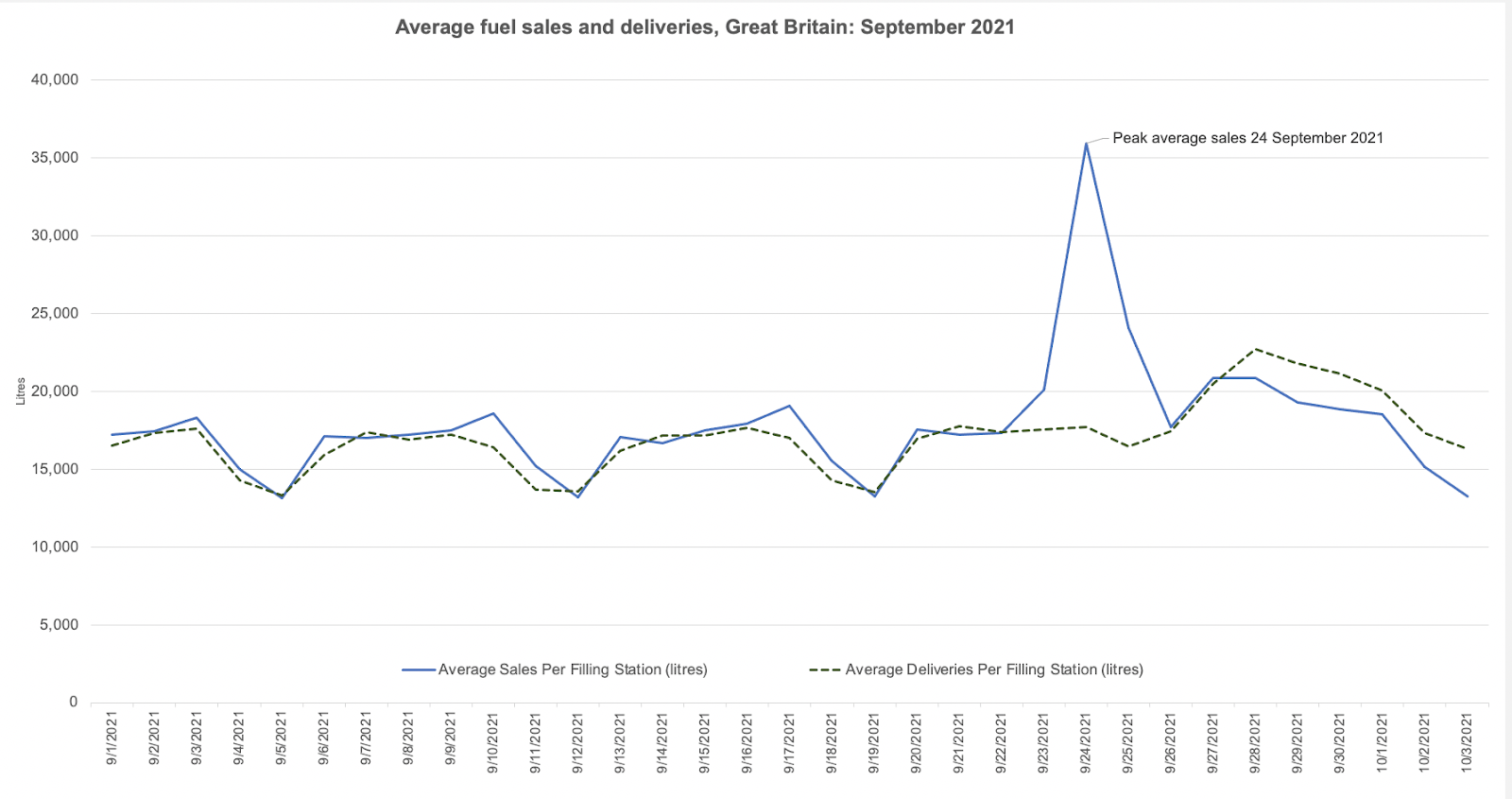 Petrol Retailers Association chairman, Brian Madderson, said he believed social media was a driver of the petrol crisis. He stated “One of the reasons for this panic buying is social media. As soon as the tanker arrives at a filling station people on social media are advising that a tanker has arrived and it is like bees to a honeypot. Everyone flocks there and within a few hours it is out again.”

Who is affected by the shortage?

The shortage has affected areas of London and the south-east most severely. Fuel is now more generally available, especially in the north of England, but 12% of petrol stations in the region were still without fuel last Thursday, according to the Petrol Retailers Association.

What is being done?

The government has implemented multiple strategies in an attempt to curb the crisis. Competition law has been suspended between oil firms, in hope that it would become easier for companies to share information and prioritise areas most in need. There are also plans for the process for getting an HGV driver licence to be sped up, and nearly one million letters have been sent to existing HGV drivers to encourage them back into the industry.

Is there another fuel crisis looming?

The past few days have seen many UK petrol stations manage to recover their stock levels to almost pre-crisis levels. However, the challenge for Britain goes far beyond the Government’s offer of temporary visas to foreign lorry drivers in an attempt to solve supply chain issues for a time. Brexit has made it more difficult and more expensive to trade with the EU; cross-border trade and transport – as well as the transfer of workers – will be permanently impacted by new layers of bureaucracy between the UK and Europe.