Nigeria could be described as being in the midst of a revolution. Its youth have reached a tipping point and are taking to the streets across Nigeria and the Nigerian Diaspora including here in the UK. Gen Zs are leading the fight against the Special Anti-Robbery Squad (SARS), a police unit which has traumatised and abused the human rights of Nigerian people for years. According to UN population figures, more than 60% of Nigeria’s population are under 24 years old and it is set to be the third-most-populous country by 2050. Whilst protests have now quietened down, for the past several weeks the world has watched young Nigerians, galvanise this power en masse. These protests have exploded onto our timelines garnering well over 100 million views, with hashtags like #EndSars and #SarsMustEnd being used to gain support locally and internationally. 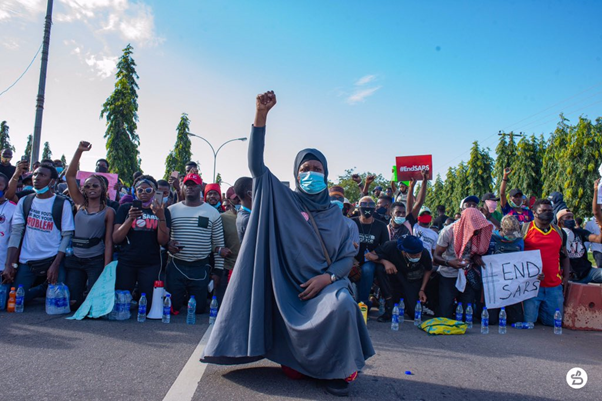 (Photo of Aisha Yesufu during a protest in Abuja, Nigeria. 10 October 2020. @veeQtor / TWITTER)

SARS was set up in 1992, initially to counter increasing armed robbery in Nigeria’s largest city, Lagos. Today, it is best known for terrorising Nigerians rather than protecting them. Amnesty International have reported that this elite police unit has been responsible for “at least 82 cases of torture, ill treatment and extra-judicial execution … between January 2017 and May 2020.” The UK government also has its own questions to answer for its funding of the police unit notorious for systematic human rights abuses. After previously denying any involvement in the now disbanded police unit, it was revealed in a letter to the Labour MP Kate Osamor, that the UK government did in fact provide both training and equipment to SARS between 2016- 2020.

Police brutality in Nigeria is nothing new

The #EndSars hashtags date back to 2017, created by Nigerian activists to pressure the government to disband SARS. In early October, the campaign resurfaced after a widely circulated video emerged, showing what is thought to be a SARS officer brutally shooting and killing a young man in the Nigerian Southern state of Delta. This video ignited outrage. Despite the Nigerian authorities vehemently denying these reports, the footage sparked widespread social media and live protests to #EndSars and bring about wider systematic change in Nigeria. This is said to be Nigeria’s “biggest and longest running” protest movement in a generation.

Young Nigerians who  are often framed as “lazy and fraudulent,” have been the biggest targets of police harassment and profiling. This has been especially true for queer people and anyone deemed to visibly stray from societal and conservative norms such as people with piercings, locs and tattoos. Nigerians have also reported being stopped by police simply  for carrying iPhones and laptops.

While police brutality and the desire to disband SARS is at the heart of this movement, young people are demanding much more. As with the Black Lives Matter (BLM) movement, these protests go beyond police brutality.  The global pandemic has cut even deeper into Nigeria’s social and economic fabric. For instance, Forty percent of Nigerians live below the poverty line, universities have remained closed due to academic staff striking since March 2020 and coupled with the worldwide BLM protests, outrage amongst Nigerians is at an all-time high. The government has been unable to provide its youth with sufficient education, future job prospects or basic infrastructure and services such as electricity and food supplies. Furthermore, the Nigerians unemployment rate has skyrocketed and currently stands at 27% for the general population-  even higher for young people at 34.9 percent.  Young people are fighting for a better Nigeria. They are taking to the streets to demand for a nation that is more just, equal and one where its leaders are held accountable. Nigerian Gen Zs have called themselves the Sọrọ sókè generation. This is a Yoruba phrase that translates to “speak up” . Sọrọ sókè has become an important battle cry and statement used by protesters to speak truth to power. Unlike previous generations, they refuse to remain quiet in the face of gross injustices.

In the face of the relentless #EndSars campaign, the Inspector General of Police was pushed to announce the dissolution of SARS on October 11. This was swiftly followed by the Nigerian president Muhammadu Buhari assuring  his citizens that this was just the beginning. He spoke out for the first time since the protests began in a televised address: “The disbandment of SARS is only the first step in our commitment to extensive police reform,” Mr Buhari said.

However, Nigerians remain sceptical. This announcement marks the fifth time that Buhari’s government has made similar promises, yet according to the Director of Amnesty International Nigeria SARS officers still act with impunity. Over the past three decades, Nigerians have grown used to the cruel cycle of vows to reform, met with failure and endemic corruption, which continue to thrive within the police force. Despite the eyes of the international community firmly set on Nigeria, many remain doubtful that this will result in substantial change.

This doubt has been magnified by the Inspector-General of Police (IGP) announcement on October 13 to form a new tactical police unit known as the Special Weapons and Tactics Team (SWAT), which will replace the SARS. People are fearful that disbanded officers will not be prosecuted and will simply be redistributed to other parts of the police force. Is there really a difference between SWAT and SARS? For Nigerian writer and political activist Gimba Kakanda, this change is simply aesthetic: “It’s nothing more than a change of name and acronym,” he said. Despite these concerns some Nigerians do see this a small step in the right direction such as David Aworawo, a history professor at the University of Lagos. In an article for Time, Aworawo said : “Police brutality will not end with the current efforts, but it will likely reduce drastically.”

In the wake of the Lekki toll gate massacre which took place just a week after the official dissolution of SARS, we have to seriously question the sincerity of the government’s promise to reform. Amnesty International provided a chilling account and timeline of the hours leading up to the killings and the atrocity itself. On October 20   peaceful #EndSARS protesters at the Lekki Toll Gate in Lagos were “met with excessive use of force by the army and police forces,” who began to open fire on crowds of protesters, killing at least 12 people. The Nigerian army is reported to have opened fire on peaceful protesters defiantly signing the national anthem and waving the Nigeran flags. In total, at least 56 people have died across Nigeria since the protests began, many at the hands of those sworn in to protect them.  Despite the harrowing live streaming of the massacre on social media the army denied any responsibility. Buhari went a step further, by blaming the deaths of his civilians on “hooliganism,” asserting that the security forces exercised “extreme restraint”. Amnesty International allege a cover-up by the Nigerian state.

As of November 4, The International Criminal Court confirmed to BBC Africa that it will “analyse materials” it has received about the reports of violence following the #EndSars protests.

It is too early to say for sure what the political and material consequences of these protests will be. However what is loud and clear is the message that young Nigerians are sending to its out of touch and ageing leaders. They refuse to accept old ways of governance and will continue to fight for real change.